Julia Barske ’13 graduated with a PhD in Biology. She has recently written a paper titled “Energetics of the acrobatic courtship in male golden-collared manakins (Manacus vitellinus)” in Proceedings of the Royal Society B December 18th.

Brian Teng ’12 graduated with a BS in Ecology, Behavior and Evolution. He has just started a new job at the University of San Diego. He is the Project Assistant for a 5-year NSF-funded research project on climate change education for key influentials. His responsibilities include website design and maintenance, social media strategy, event planning, and administrative activities. More on the project is available here (http://www.sandiego.edu/climate/). 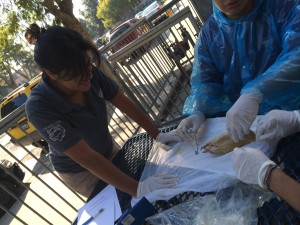 Leslie Grant ’12 graduated from UCLA with a Biology degree. She is currently finishing up her second year in Teach for America, where she works in an Alliance charter school in Downtown Los Angeles. She currently teaches a 10th grade Anatomy & Physiology course at this school. The most recent project they have done was a dissection of rats and fetal pigs, which was funded through Donor’s Choose. Attached is an image of the students engaging in the dissection.

Mark Landig ’08, at left, is a graduate student in the School of Optometry at UCBerkeley. He is a Berkeley Optometry Ambassador, working in conjunction with the Admissions & Student Affairs Office to provide prospective students with“real life” information regarding what it’s like to be an Optometry student at UC
Berkeley.

Gina Schellenbaum (now Lovasi) ’01 graduated with a BS in Ecology, Behavior and Evolution. “Dr. Lovasi awarded Calderone prize Dr. Gina Lovasi, assistant professor of epidemiology, has been awarded the Frank A. Calderone Junior Faculty Prize, which gives $25,000 to support her research efforts on the project “Neighborhood commercial resources and sudden cardiac arrest.” The prize was established by the Calderone family in 1986 to honor Dr. Calderone’s distinguished career and life-long commitment to the health of the public.”

Kristin Searcy Bell ’97 holds both an MS and a PhD in civil and environmental engineering from NorthwesternUniversity.   She is a manager for the Environ Foundation, which is an international consultancy working to help resolve demanding environmental and human health issues.  She has over seven years of experience in environmental engineering, with particular emphasis onassessing the fate and transport of contaminants in river systems. She has served as the manager for sediment remediation and restoration projects that involved contaminated sediment assessment, remedy evaluation, and remedy selection. Kristin has written and co-authored several peer-reviewed papers addressing contaminant and pathogen transport in riverine systems.

Marcel P. Fraix ’96 earned a D.O. at the College of Osteopathic Medicine of the Pacific,
Pomona, California.  He is presently an Assistant Professor of Physical Medicine and Rehabilitation at Western University of Health Sciences.

Peter Girguis ’94 graduated from the Ecology and Evolutionary Biology Department. He worked closely with David Chapman, Len Muscatine, and Bill Hamner.  This September (2013), he was promoted to full professor with tenure at Harvard University.  “I’m very grateful for being promoted, and I believe wholeheartedly that my training and experiences at UCLA made me the scientist that I am today.  I wanted to thank my mentors, of course, but also the many faculty, graduate students and my peers who took the time to teach me what they knew and encourage me to do my best.”

Lisa Gunn Adams PhD ’93 (Gordon) is an Assistant Professor of Biology and Biology Education in the Department of Biology and Physics at Kennesaw State University, located just north of Atlanta. Adams’ research program deals with establishing student monitoring programs using the Basic Observation Buoy (BOB).  BOB is a low cost, educationally friendly, monitoring device that is made primarily of PVC tubing. The buoy is assembled by students and serves as a platform for sensors that continuously sample the water. Students collect data on various parameters, like pH, Dissolved Oxygen, Salinity, and Temperature levels of protected waters, like tidal creeks, estuaries and lakes. BOB has been implemented in many users groups, ranging from middle school to university level students.   Students are able to share their data with their community and contribute to the coverage of our existing coastal monitoring efforts.  Adams is the Chair of the Education and Outreach Southeast Coastal Ocean Observing Regional Association (SECOORA), which is part of the Integrated Ocean Observing System (IOOS).

Ardem Patapoutian ’90, at left,  received a PhD in Biology from the California Institute of Technology. He is a Professor of Cell Biology at the Scripps Research Institute  and a member of the Faculty of 1000. He can be contacted at apatapou@gnf.org or ardem@scripps.edu.

Lisa Marie (Tolman) von Biela ’80 graduated with a BS in Biology. She is thrilled to announce that her second novel, a medical thriller entitled The Janus Legacy, was just released. Her noir novella, Ash and Bone, is due out in May 2014, and her next novel, another medical thriller entitled Blockbuster, is due out in January 2015.  Her debut technothriller novel, The Genesis Code, came out in May 2013.  Updates may be found on her website:  lisavonbiela.com. 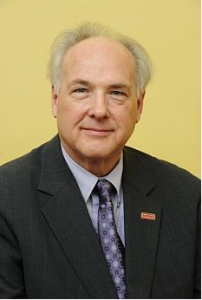 Clark F. Ford ’75, at left,  is an Associate Professor of Food Science and Human Nutrition at Iowa State University. His research involves genetic engineering of glucoamylase; the structure/function relationships of cloned gene products; and the recovery and purification of fusion proteins. He can be contacted at cfford@iastate.edu.

Francesco Chiappelli ’75 graduated with a BS from the Biology Department. But, as the department “evolved” over the years, from Department of Biology in the 1970s, to the departments of Molecular, Cell, and Developmental Biology (MCDB)  and of Biology in the 1980’s, to MCDB and the dept of  Organismic Biology, Ecology, and Evolution in the 1990s, he kinda always “saw” himself as an alumnus of MCDB – “perhaps because eventually I ended up in Dr. Fahey’s lab for my post-doc in fundamental & clinical immunology. Be that as it may, I am happy and proud to be considered ‘one of yours’!”
“Well, a lot has happened over the past four decades, but I can say – equally proudly – that for me at least, everything noteworthy that happened to me professionally happened at UCLA:  MA (’81), PhD (’86), post-docs (’87-’90), research faculty first at Harbor-UCLA (’90-’92), then with my first NIH grant: set up my first lab on the grounds of the West LA VA with an appointment in what used to be Anatomy & Cell Biology (’92-’94), then recruitment by the UCLA School of Dentistry, where I have been ever since – now for several years  Full Professor, tenured.
Most recent developments and updates that you might be interested in are:  becoming AAAS Fellow in 2011, becoming a Fulbrightalumnus last year (2012), and presently being the President of the Fulbright Association, Greater Los Angeles Chapter.
UCLA has been good to me, starting with the Department of Biology that I loved!  Indeed, I came to UCLA (and to the US in fact) in September 1972, and have been associated directly with UCLA ever since:  this is my 41st academic year on our campus.
Three profs, while I was a student in your/our department, to whom I will for ever be thankful:
My dream was always to be able, one day, to serve my “mother department”, if I may refer to Biology by such affectionate terms.  The closest I ever came was to be on the Graduate Review.” 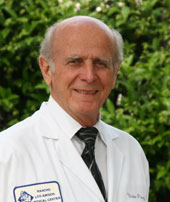 Victor Passy ’53, MD, at left,  is Professor Emeritus in the Department of Otolaryngology, Head & Neck Surgery at the UCI College of Medicine. He received the “Lifetime Achievement Award” in 2005 for his contributions to otolaryngology (e.g.,development of the Passy-Muir Tracheostomy Speaking Valve, development of the ENT program at UCI, etc.). He was also awarded the”Golden Apple Award” by CCM (an undergraduate pre-med organization at UCI) in 1981, “Outstanding Teacher” by Rancho Los Amigos National Rehabilitation Center and White Memorial Hospital ENT Residents in1979, “Outstanding Teacher by UCI in 1978, elected into the AOA (Alpha Omega Alpha) Honorary Fraternity in 1976, President UCI Alumni in 1980 and UCI Alumni Physician of the Year in 1981.

The Spring 2014 catalog of Johns Hopkins University Press announces that in February his new book, Environmental Problems of the Greeks and Romans will appear in print.